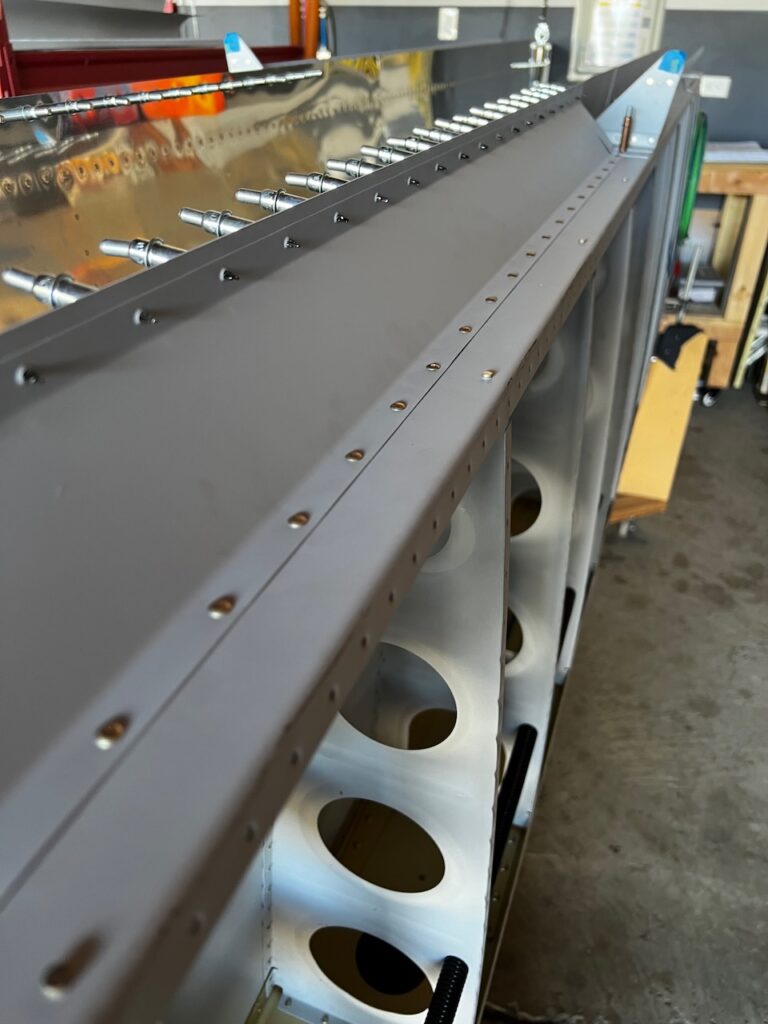 Over the last couple of sessions I was able to get the Aileron Gap Fairings installed. Everything was fairly straight forward. The only issue was the rivet conflict with the SB doublers mentioned in the previous post. After consulting with Alexander (EAA Tech Counselor), I decided to attempt riveting with an angled bucking bar (the squeezer wouldn’t work). The results were, well, not pretty. The rivet got pretty smashed up as I was at an angle that resulted in the edge of the bar smashing the rivet. I’m not sure there was any technique that could have done this differently. It was ugly enough that I called Van’s for their recommendation. In the end I got the answer I was suspecting which was that that rivet was not structurally significant, and it’s probably better to just leave the smashed head alone. The perfectionist in me hates that answer, but I’ve seen what trying to correct rivets can result in (bigger holes, etc) so I decided to accept the imperfection. See below for the pictures of those rivets. Lesson learned…think about all the implications of riveting (including those things around and close by) before starting to permanently install things. One other note, the plans call for AN426AD3-3 rivets for the top skin trailing edge to gap fairing attach. This is a really short rivet, and when using my rivet gauge it was clear the rivet length did not meet the “standard”. This will typically result in a thinner than normal shop head. My only thought was since there is a moving control surface that is in the proximity there was an explicit decision to accept that thinner head? Since I was on the phone with Van’s Aircraft Builder Support, I asked the question and they mentioned that in all their years they have never gotten that question before. Odd. He also wasn’t sure why it was specified that way, but recommended I proceed as instructions call out just in case the engineers were accounting for clearance tolerances.  Below are some photos of the sessions, and the completed gap fairings! Next up will be either the flap braces (which might be a two person job), or work on the ailerons. Until that decision…. Happy Building!